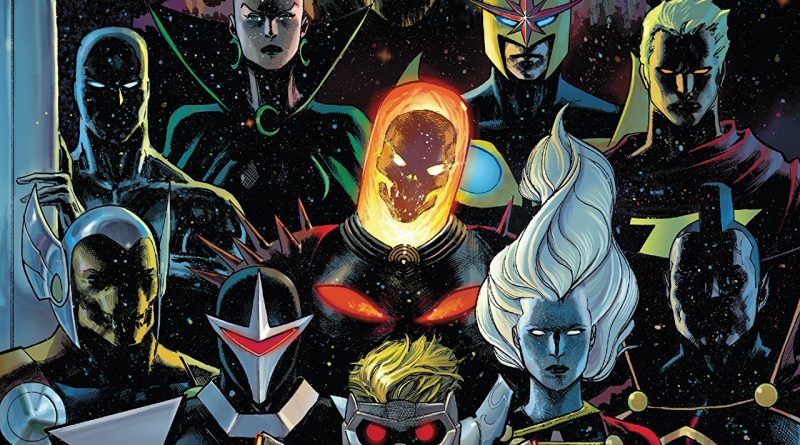 Hello and welcome back! I thought I’d shake things up a little and put out a weekend review for you. Today, on this fine Saturday, I’ll review issues #1-6 of the new “Guardians of the Galaxy!”  I’ve been anticipating this series ever since it was announced that it would be written by rising star Donny Cates. His other work for Marvel and his independent work are all critically acclaimed, so I was excited when I found out that he’d be writing for the galaxy’s most notorious outlaws! So, without further delay, let’s get to it!

The first 6 issues of this new series is an arc titled “The Final Gauntlet.”  Issue #1 kicks off shortly after the events of 2018’s “Infinity Wars” (the comic, not the movie), where we find that all the cosmic heroes, save for The Avengers, have gathered to hear the last will and testament of Thanos. However, no one seems all that happy because they all know that this could be an elaborate trap to kill them all in the event of his death. As it turns out, they aren’t far off. A hologram of Thanos appears and basically says that the heroes should enjoy this victory while they have it because he had a failsafe in place. Should he be killed, his consciousness would be uploaded to a suitable, and unsuspecting, host. It could be anybody, anywhere. He assures them that they won’t be able to figure out who until it’s too late. Thanos will live again! That’s his promise. In essence, Thanos is putting the universe on notice.

One of the groups present for this is The Guardians of the Galaxy. Or at least, what’s left of them. This is where things might get confusing for people who didn’t read “Infinity Wars.” A lot went on during that event and many of the characters, especially Peter Quill, are still coping with the aftermath. The group is in shambles. The only ones who remain of the original team are Peter Quill, aka Star-Lord, and Groot. The rest consists of a few obscure characters including Phyla-Vell, Cosmic Ghost Rider, and Beta Ray Bill. Drax is dead, Gamora is on the run and Rocket? Well, we don’t talk about Rocket. Suffice it to say he hasn’t been heard from in a long time.

The other characters in attendance, including Cosmic Ghost Rider, conclude that Gamora is the most likely candidate to be Thanos’ host body. After all, she’s his daughter and he trained her for years to be the deadliest assassin in the universe. Who knows? Perhaps he was training her because this was his plan all along. They come to the conclusion that Gamora must be found and killed. Naturally, Peter isn’t completely down with this idea because he’s in love with her. Even though she stabbed him not too long ago while under the effects of mind control. He would rather find her and maybe prevent the uploading of Thanos’ mind into her body. And maybe she might have an idea of who the host body is.

How could things get any worse? I’m glad you asked! You see, there are some out there who wish to see Thanos returned to his former glory. Who? None other than his former minions, The Black Order! For the last little while, this group has been freelancing as enforcers for whoever pays them the most. However, when Hela, the Goddess of Death, approaches them with an offer to restore their master, there’s no way they can refuse!

We now turn our attention back to The Guardians. One of the things that Cates does so brilliantly is stakes. In this story, the stakes are so universal and yet so personal. Peter is desperate to find the woman he loves because she could be the key to saving the universe. Yet he’s also dealing with PTSD due to the fact that he was at deaths’ door very recently. Some of the others would rather find Gamora, kill her, and just be done with it. This causes some characters, including Cosmic Ghost Rider, to split from the main group and form a new team dubbed The Dark Guardians.

The next few issues of this arc go by at break-neck speed and the events just keep escalating. Eventually, Gamora is found by The Guardians and she reveals that she isn’t the intended host body. But she knows who is. The arc culminates in a showdown between The Guardians, The Dark Guardians, and Hela and The Black Order to prevent the complete resurrection of Thanos. The rest I dare not spoil because the twist is so out of nowhere and so great that you must read it firsthand!

This is what I love about Cates’ writing. He’s able to take any character or team that you hand him and do something new and brilliant! This version of The Guardians is familiar to both readers of the comics and fans of the movies, yet they are at their lowest point. It’s funny, yet heartbreaking. These characters are portrayed in their truest form while also being broken down to the bare essentials without all the confusing backstory that tends to weigh down these cosmic level tales. The only part that might be confusing is the references/flashbacks to “Infinity Wars” If you didn’t read that. Thankfully, it gets going fast enough that you’re able to just jump on board and roll with the punches without caring too much. It’s a compelling story the likes of which hasn’t been seen in a Guardians book in quite some time. At least, that’s my opinion. Once again, Donny Cates saves a doomed series! So yes, I give this book a recommendation with the concession that you might be confused for a bit If you didn’t read “Infinity Wars.” Either way, give it a shot and judge for yourself! That’s it for today. Hope you enjoyed it! Next time, I’ll be back with a review of the next 2 issues of the new X-Men books. Until then, stay comical!

The Pressure of Finals

May 14, 2017 Editor-In-Chief Comments Off on The Pressure of Finals