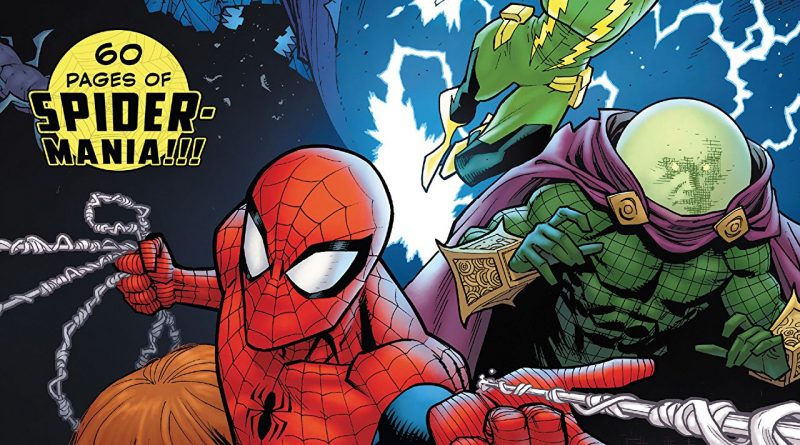 Hello again! Hopefully, you’ve all had a wonderful weekend and are ready for another round of posts. We’re starting the week off with a review of issues #23-25 of “The Amazing Spider-Man” written by Nick Spencer. I should note that, when it comes to issue #23, the term “review” is used lightly because that particular issue serves as an epilogue to “Hunted” and nothing much happens. The meat of this article will be for #24 and #25. But, enough of the semantics! Let’s get started!

When we last left Spidey, he had just returned home after a long night during the events of “Hunted”. Peter spends most of his brief time in issue #23 reflecting on what just happened. The rest of that issue is devoted mostly to the funeral of Kraven and how his son is coping with it. Not well, to say the least. Especially considering he is the one responsible for his death since Kraven was disguised as Spider-Man at the time. There’s a tremendous, and logical, sense of guilt that the son is feeling. So much so that he almost doesn’t feel worthy of the Kraven name. That is until he reads a letter left for him by his father. He’s left his son his entire legacy, including weapons, clothing, and other possessions. The son finds all these things and then, just as his father planned, takes up the mantle of Kraven The Hunter. We also see the surprise return of Kraven’s half-brother, Dimitri aka The Chameleon, who claims to have big plans in store.

Issue #23 wasn’t really anything special. I enjoyed it for what it was. Although I’m not sure we needed to spend 95% of it focusing on the aftermath of Kraven’s death. I would have preferred a more 50/50 split between that and what Peter and MJ are dealing with. Then again, Kraven is a very popular villain in Spider-Man lore, so giving him a proper send-off is probably the right thing to do. But even then, He’s not really dead because his son is there to take over. What can I say? For the first time in a while, an issue of Spider-Man was a mixed bag for me.

Now we get to the real story. You see, ever since Spencer started his run, he’s been building up the mystery of this character who seems to be mystical in nature and who can make anyone bend to his will, including the mighty Kingpin of Crime. He also knows everything there is to know about Peter Parker. I mean, literally everything! This has led to rampant speculation and theorizing as to who this character is. All we knew up until now is that he has weird centipede, tentacle-like things that protrude from his back and a hideous face. One of the most popular theories is that he’s a version of Peter Parker from before Peter and MJ’s marriage was erased 10 years ago during the “One More Day” arc. Confusing, I know. That’s comics for you. But that’s by far the most prominent theory. It’s also the most logical when you consider his complete knowledge of Peter’s life and the way he lurks around MJ when she’s asleep and Peter isn’t around. I think Spencer is trying to set up a long-running mystery here akin to what Stan Lee did with the Green Goblin in the early days of Spidey comics and it’s definitely working in my opinion!

In issue #24, Peter begins to have nightmares about this character, and he believes that dreams are too real to be just dreams. At first, he tries to hide it from MJ. But, as we all know, she knows Peter too well and can sense when something is wrong with him. Peter finally confesses that he has been having these nightmares ever since “Hunted” was going on. Naturally, MJ tells him not to worry about it. Chalking it up to a traumatic experience. Of course, Peter agrees with her and decides to try and ignore it. That is until the next nightmare happens. In this one, the mystery character finally talks to Peter directly and reveals his name: Kindred. Now, if you ask me, this name is a little lackluster. Especially since we’ve been building him up for so long. However, it does add fuel to the fire of the theory that Kindred is just Peter from before the marriage was erased. He’s “kindred” to Peter because he actually is Peter. Now, the true nature of his plan will undoubtedly go on for several more issues. But at least now we have a name. The real question is: How does Mysterio factor into all of this?

Here’s the deal with Mysterio: he’s been locked up in a maximum-security prison for quite some time. At least 5 years in real time if my memory is correct. When we catch up with him in issue #25, he’s in a therapy session. The therapist is grilling him about his fascination with illusions and his so-called “death and resurrection”. Mysterio claims to have been in hell for many years after his battle with cancer. He was then restored to life by a mysterious figure. The therapist isn’t buying it. But, to play along, he asks Mysterio what this individuals name is. Mysterio won’t answer the question. The therapist asks the question again and again. Eventually, after much resistance, Mysterio answers with the name Kindred. This is where Kindred makes his grand entrance and kills off Mysterio! Or does he? As it turns out, Mysterio had simply swapped places with the therapist and made him believe that he was in fact Mysterio. Good, old fashioned trickery. This is also where we get the big reveal of Kindred’s name. These events line up perfectly with Peter’s vision. As it turns out, Kindred has been around for years and was the one who resurrected Mysterio. Who knows what other strings he has pulled?

I have to say, I’m really enjoying the mystery of Kindred. I don’t think I have ever been this invested in a Spider-Man story since I started reading consistently back in 2014. I just hope the payoff is worth it. Stories with this great of setup don’t always pan out well. Just look at the mystery of the Hobgoblin. Great setup. Kind of a lousy payoff. Although I have high hopes that this will turn out great! Needless to say, I give this a thumbs up and a high recommendation! Go give it a read if you are so inclined. You won’t regret it! Next time, I’ll be back with a review of the first 6 issues of “Guardians of the Galaxy” and then it’s an X-Men 1-2 punch! Until then, stay comical!