Instead of reviewing a movie today, I am reviewing the pilot episode of the USF student-made TV show called Clara•fication, which is directed by Yuharelly Comparan and created by Micah Abraham. The episode premiered on Monday, November 20th.

I will go through the same grading criteria I normally do, but will keep the concept of the whole show in mind, since it is very low budget, and give it a final grade as though I am a TV executive they are pitching the show to. The final grade will either be “I want more”, “I don’t want more”, or “How did anyone even agree to work on this?”.

Clara•fication‘s concept is just wacky enough while being just solid enough to intrigue people into watching it. About 60-70 people came to watch the premier, with only about 10-15 being the cast and crew. This doubled my expectations as I only thought there would be maybe 20-30 people there.

Throughout the episode, you can tell Clara•fication had writers who understand how to write good comedy that the actors nailed the delivery of almost every time. On the flip side of that, however, there were a few moments where the episode slows down to a more dramatic or serious tone. When this happens, it feels as though the actors weren’t as comfortable performing in a non-comedic way either because it’s not their normal style or because the dialogue was clunkier.

Overall, the cinematography was basic or bland, but it didn’t really detract from the episode too much. There were two scenes, however, where people or things got in the way of the shot for a majority the scene and I wish they would have redone it with the camera moved slightly over so that wouldn’t happen. There are also a few scenes where the microphone work was spotty compared to the rest of the episode.

The last negative I’ll point out is that there were a few continuity issues and moments where items are visible that probably shouldn’t be. One set of scenes in particular feel like a last minute add as though they were last minute add-ons to the episode. That aside, the plot of Clara•fication keeps you involved enough that these issues are easy enough to get over. After all, this is only the Pilot.

My favorite two parts of the entire episode are definitely the theme song/intro part and the scenes where they cut back to the main character recording himself telling the story in present time, which is interwoven with the main parts of the episode that take place in the past.

To clarify, this is a tv episode that could be cut in a few places to help the pacing just a tiny bit. The comedy and acting are both on point (for the most part) along with the plot being intriguing enough to make you stay to see what happens. There are some issues that are typically major issues, but because this is an extremely low to no budget production and it is only the pilot episode, if I were a TV exec looking to pick this up, I would look at them as the wrinkles I can help iron out before airing the episode. If you haven’t guessed by now, “I want more” of Clara•fication. 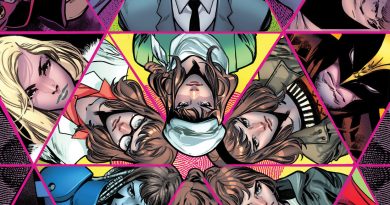 Comics Cornerstone: The Many Lives of Moira MacTaggert

August 27, 2019 Baily Vis Comments Off on Comics Cornerstone: The Many Lives of Moira MacTaggert

April 2, 2017 Ellie Herman Comments Off on Christ, Community, and Chapel