The USF community gathers to show appreciation for the hard work shown at the art exhibition featuring USF faculty and alumni.

Celebrating accomplished art is one of the many ways the USF community connects on homecoming week. Nancy Olive, an art professor at USF, is retiring this year after her many years contributing to the University and featured some of her unique pieces with her many different kinds of printmaking.

“Drypoint and letterpress and book enclosure. So all are very different from all from one another, [it is] all printmaking though,” Olive says.

Olive included her screen printing piece “Spring Comes Earlier” that is apart of an exhibition in which she had to create 33 copies of the piece.

“I was really excited to be asked. I was one of the seven South Dakota artists to do it, and the biggest challenge was a set of 33, which all had to be alike,” Olive says.

“I’ve been on the lookout for different things. It sharpened my eye for different artists in different places,” Palmer says. “Once you start acquiring a little then you start to think, oh I could get some more.”

Palmer says he’s glad he unexpectedly caught the show on his visit back to campus.
“You never know where art will find you. That’s the way I looked at it. You’re never too late to appreciate art or to get involved with it one way or the other,” Palmer says.

The faculty and alumni shows ended on October 12th, but if you would like to check out more art on campus, there is always new pieces being shown about every month in the Mears Library and Jeschke green room. 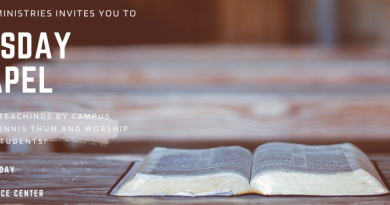 May 14, 2020 Editor-In-Chief Comments Off on University of Sioux Falls Campus Ministries

November 22, 2017 Editor-In-Chief Comments Off on Branches of Thankfulness