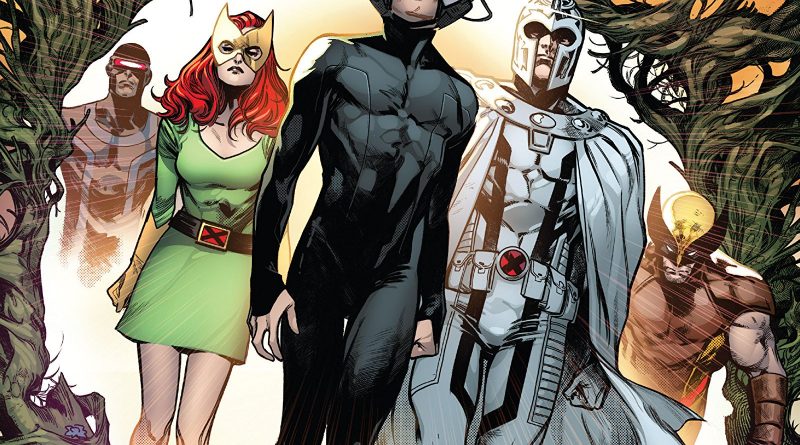 Welcome back, all!  It’s time for another “Comics Cornerstone“.  Today I have the final doubleheader as we’ve finally reached the conclusion of “House of X” and “Powers of X“.  Yes, these have both been out for a couple of weeks now.  But, I thought there was no better time to round the series out than right at the cusp of the brand new “X-Men” title.  I hope you enjoy what’s coming up!  Let’s get down to business!

Before I get too far, I should note that both of these issues cover the very same events.  So, my transition from one title to the other might not be as obvious.  Please bear with me.

For the past 3 months, Jonathon Hickman has been reworking Marvel’s mutant mythology from the ground up.  Both of these books have essentially been a giant think piece about what it means to be a mutant when humanity would rather you didn’t exist.  While not very action-heavy, the 12 issues have been very thought-provoking and have also introduced some plots and concepts that are very intriguing and will, without a doubt, have consequences in the future.  This type of writing is what Hickman excels at.  Unfortunately, it does fall into the trope of sputtering out toward the end.  More on that later.

So, we’ve finally reached the end.  Let’s start off with “House“. Though this was well written, I sort of expected more. Not much happens here other than the first meeting of what Xavier calls “The Quiet Council”.  This group is meant to be the governing body of Krakoa and all of mutant-kind. After establishing the laws of the land, their first order of business is to pass sentence on the villainous Sabertooth. No spoilers, but it’s pretty brutal. No doubt there will be consequences for that in the future. Though for now, he is not a problem.

The rest of this issue left me with sort of a “meh” feeling. This felt like something that should’ve happened  3 issues ago. I basically would have preferred if they had swapped issue #3 and issue #6 around. In my eyes, that would’ve been a more satisfying conclusion. For those of you who haven’t read issue #3 yet, that was probably the most compelling of the series and would be a great plot to pick up in the main series. That’s not to say what we got wasn’t great. I just feel it was misplaced and would better serve as a mid-point rather than a conclusion.  With that said, I have to remember that this just serves as a setup for “X-Men” proper and, therefore, all this will be solved in time.  That doesn’t mean I still can’t be slightly disappointed.

The same can be said for “Powers”.  It starts off on a compelling note in the distant future.  Mutants are dominant over humans and the elite class must decide whether or not they should become part of a collective conscience known as the Phalanx.  It seems too good to be true and some are suspicious that this is just a trap to make them slaves to machines.  This is where Moira MacTaggart comes back into play.  Surprisingly enough, she and a few other mutants from current times are still alive thousands of years in the future.  Due to Moira’s mutant ability to travel back in time via reincarnation, she decides to have Wolverine murder her so that she may go back and prevent this dystopian future.

The rest is just a recap of information we are already aware of.  And that’s a shame because, though very good, it still doesn’t feel like a finale.  I would’ve rather this issue lived up to its full potential than give us an unnecessary recap.  There were probably dozens of different directions this could’ve gone instead of retreading old news.

Overall, I’m pretty disappointed with how this ended.  However, that doesn’t invalidate the two series as a whole. They’re still definitely worth reading.  Just be aware that it doesn’t end on the highest of notes.  Why?  Just because Hickman wanted to save the good stuff for the proper “X-Men” series.  So know that going in.  Thankfully, the good far outweighs the bad!  It’s an interesting look at how mutants are slowly becoming the dominant species on earth and how humans have to either get on board or face immediate extinction.  Hopefully, this fiction never becomes fact.  Sure,  it has its weak spots. Every story does.  Though I stand by my opinion that there’s never been a better time for readers new and old to jump on the X-train.

That’ll do it for now.  I hope you enjoyed this review and my overall coverage of “House” and “Powers”!  It was an enjoyable endeavor and I hope it encouraged you to read it–despite its flaws.  As for what’s coming next, there should be some Spidey and “Absolute Carnage” in the feed in the next few days.  Look forward to that and until next time, stay comical!

February 29, 2016 Editor-In-Chief Comments Off on Neighbors

One More Cup: The Side Effects of too Much Caffeine

October 20, 2016 Editor-In-Chief Comments Off on One More Cup: The Side Effects of too Much Caffeine