David Crater, son of David and Vernestine Haynes, was born April 29, 1962 in Chicago, IL. He grew up and was educated in Chicago. David joined the United States Army and received an Honorable Discharge. During his working career as a Maintenance Technician, he worked for different companies but his heart was with the University of Sioux Falls.

David met Darlene Sell in Fargo, ND in 2001. Their relationship blossomed to a life together and they relocated to Sioux Falls where David worked at the University of Sioux Falls as a Maintenance Technician. The students loved David because of his genuine interest in their lives. He enjoyed watching the students’ blossom into young adults as they entered the career world. The students of the University of Sioux Falls recognized and honored David with a Certificate of Appreciation during a graduation ceremony.

David was a fun loving, gregarious man. He had a very big heart for others in need. He even carried that generosity to the gift of sight by donating his cornea’s that will be used by two individuals. He loved to follow the lives of his children and grandchildren. Being from Chicago he was a huge fan of all the Chicago professional sports, Bears, Bulls, Cubs, White Sox, and Blackhawks. 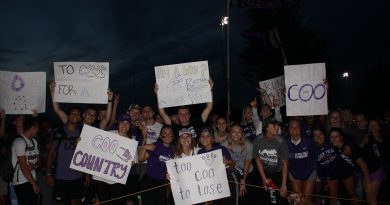 April 30, 2017 Editor-In-Chief Comments Off on Wind and Jazz Ensembles Prepare for Spring Kickoff