Cougar Softball is in the thick of conference play after their pre-season trip around the country.

The Cougars began their pre-season trip playing in the Desert Stinger Invite in Las Vegas, Nevada. On February 3rd, their trip to Sin City started with a game against Montana State-Billings with a 6-5 win. After a 1-0 start to the season the Cougars would finish the tournament winning one more and losing three. They finished with a 2-3 record which tied for best with other NSIC teams at the tournament.

The Cougars stopped in familiar territory with a trip to St. Cloud, Minnesota for the Husky Dome Classic where they were impressive. The Cougars were 5-1 including five straight wins in the tournament. Head Coach Kelsey Thompson reached the 100 career wins milestone after a 6-5 win over Concordia St. Paul in extra innings. The game was stalemated at 1-1 after the regulation seven innings when both offenses heated up for nine total runs in the two extra innings. Thompson is 102-63 in her USF career.

Next stop for the Cougars was Clermont, Florida from March 10th through March 14th. In the Sunshine State the Cougars played 8 games against teams from all around the country. After beginning the tournament with a 0-9 loss, the Cougars bounced back and went 5-3 in the tournament.

After a sunny week in Florida the Cougars made their way back to the midwest for the HyVee Classic in St. Joseph, Missouri. The Cougars, maybe suffering from jet-leg, struggled in the HyVee Classic, dropping 5 of 6 games in the Show-Me State for a total score of 26-47.

The Cougars then traveled to Fayette, Iowa to face off with Upper Iowa on Saturday where the Cougars swept the Peacocks by a combined 11-5 scoreline. The second saw the Cougars shut the Peacocks out 5-0 behind Junior Breanna Black’s six inning allowing only four hits.

Winona, Minnesota is where the Cougars ended their road trip getting swept by the Warriors after two blowouts. The Cougars struggled to get the bat on the ball scoring only one run between two games and mustering only one hit in their 0-8 loss that only required five innings. 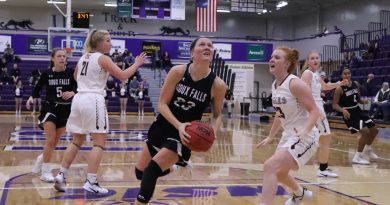