The volleyball  season is coming to an end for the University of Sioux Falls.  The USF Sports Line team welcomed Volleyball Head Coach, Joel McCarthy to discuss his expectations going forward with the rest of the season.

The season has been record breaking for the Sioux Falls Cougars. They currently have a three game lead in the conference. However, Coach McCarthy says that it has not been a cake walk.

“The conference has gotten better every year we’ve been in here (the Northern Sun Inter-collegiate Conference), so it’s been a uphill battle just to get in this position, but it feels good to be here.”

The NSIC is loaded with national top 25 volleyball teams, and although the Cougars are not one of them, they are not far behind. Recruiting has been a big part of the progress made by the Cougars, and this year is no different. However, Coach McCarthy is not really focused on next year’s class.

“We have a spectacular class moving out. Graduating, we have three seniors who are all on our court every weekend and we are focused on that group,” McCarthy says.

There has been a drastic improvement from last year. However, there could not be improvement without hard work, attention to detail, and commitment from the players. The Cougars relied heavily on their freshmen players last year.

“When we committed to our class of freshman last year and put five of those athletes on the floor, we knew were going to be young, with a lot of challenges, to get them up to speed, and to build a family, on and off the court.”

Bria Barfnecht and Lexi Scott are great on and off the court together. The family aspect of this team can be seen through their interactions.

“We had a lot of freshman coming in; we had a lot of youth, so we added a year of experience,” Scott says. She believes the team’s determination is what has helped the Cougars progress so far from the previous year.

“We were all unhappy with the way the season ended last year, so we were determined to be better this year.”

The Cougars only graduated one senior in 2015, which made it easy for them to not only get better on the court, but come together off the court much easier as well.

Looking forward to next year, Scott says, “Staying together and bringing in a strong class next year will help us keep growing.”

Come back next week, when the USF Sports line crew takes an inside look at The Cougar Cross Country Team. 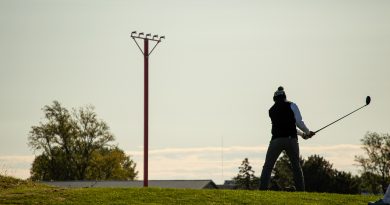 October 25, 2016 Editor-In-Chief Comments Off on Dive in with new USF’s Swim Team