Spring is here and after a successful season last year, the USF football team has started practicing again. The Coo are looking forward to another winning season. The 2015-2016 season will always be remembered by many, because it was the first time the USF football program made it to the playoffs in NCAA division II. The goal for this upcoming season is to not just repeat this performance, but to improve it.

During the entire winter off season, the players have been working out and conditioning. Spring practices allow players to prove themselves to the coaches, and also gives the coaches a chance to see what new talent and skills have developed.

“It’s also fun being able to workout with all your teammates and build better relationships with them through working out like that”, says sophomore running back Riley Waldie.

The first practice for the team was really cold for a spring day, but the team performed like usual despite the number of players that graduated on the defensive side of the team. The offense looked as explosive as ever with returning senior quarterback, Luke Papillion, leading the squad.

“We’re throwing in some new wrinkles both offensively and defensively, so it should be exciting for many of the players and a lot of the fans as well”, says senior tight end Clarke Cooper.

Spring ball consists of fifteen practices all along the month of April. To conclude it, The Coo will play its annual spring game on Friday, April 29th at 7:30 P.M. The game will be played at Bob Young Field, USF’s home stadium. Anyone is welcome! 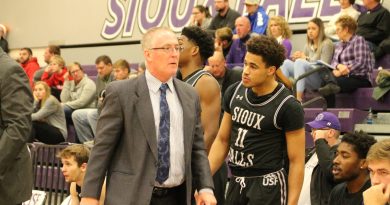 March 1, 2019 Editor-In-Chief Comments Off on Cougar Basketball is new passion for Norwegian student