Arts & Theatre Student Life
March 10, 2015March 10, 2015 Editor-In-Chief 989 Views
Dancing With the Stars has come to campus for the first time ever. Six couples take the stage to compete for first place and a $150 prize.
The dance competition will happen over three different weeks. The first performance will take place on Wed. March 11th in the Meredith Auditorium. Competitors will dance to Disney songs that are roughly 2-3 minutes long. Week number two will feature superstars such as Michael Jackson, Beyonce, and the Backstreet Boys. The dancers will choose their songs for the third and final week.
“Hopefully they’ll want to do this every year after this because this one went so well,” said sophomore Eli Dooyema. “I’m really excited to be able to be a part of it.”
The dancers are made up of students from baseball, football, track, basketball, theater, choir, and residence life. The couples include: Eli Dooyema & Keisha Sarpong, Jagger Gran & Taylor Boshart, Travis Balt & Sarah Powell, Aaron Pleitez & Allison Carmany, Cornelius Botha & Emily Englund, and Garrett Rowe & Lauren Nelson. Each choreographer was chosen for her background in dance and was paired with a couple. Choreographers for the event are Allyssa Krull, Willow Colbrese, Brittany Kurtenbach, Marianna Brawand, Cassie Nack, and Thea Feterl.
“It’s a lot of fun working with the dancers and seeing them get better each time we practice,” said freshman Marianna Brawand.
Masters of Ceremony Scott Greenman and Chase Jensen will entertain between acts. Brigitte Gross, Rachel Foster, and Bryce Wildenauer will be the judges and account for 40% of the total vote, while the audience will account for 60% by texting in their votes electronically.
Week two will be held after spring break on Fri. March 27th and the finale on Wed. April 1st. 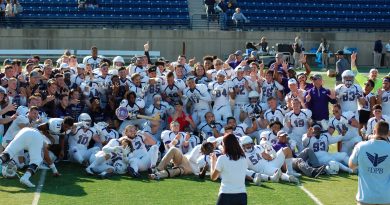