The 8th annual USF Winter Olympics kicked off on Sunday night in Java City. Around 100 students marched across campus, cheering and getting riled up for the week-long festivities to commence.

“It’s a good way to have some fun competition,” said Student Activities Director Nathan Hofer. “It’s a good environment for building relationships and making a better campus community.”
Last year’s champions Kroske Hall, representing the country of Jamaica, hosted the opening festivities. Its Resident Director, Marcus Brooks, gave a rousing pump-up speech.
“So I hope you’re all ready for this, because as you can see, Jamaica is,” Brooks said as the Jamaican-clad girls cheered.
Kroske’s residents performed skits to represent each of the nations. Residents from Sullivan (Ukraine), Grand Island (Switzerland), and Burgess (Oman) showed off their country’s colors at the ceremony through clothing, face painting, and flag waving.
“Spectators are at the center of the events,” said Cougar Activities Board President Rachel VenHuizen.
The first event, the biathlon, immediately followed the performances. Two pairs from each country competed for the gold medal in sub-freezing weather. Competitors raced two-by-two, with their inside legs taped together.
The race started at the Science Center arch and made its way to Jorden Hall, down to Jeschke, up the stairs, and down the road to the cougar statue. There were three stations where the runners had to shoot Nerf bullets into chalk-drawn circles and hula hoops.
“You get to know people you may not have known in the past,” VenHuizen said. “So you create community through that.”
Ukraine’s Katie Stahl and Colleen Thompson took first place, followed by Jamaica’s Jenn Kruger and Jeannie Oberkirsch, and Jamaica’s Rachel Polson and Allison Carmany taking the bronze. Jamaica is currently in the lead with 9 points, with Ukraine in second place at 7 points, and Oman in third with 3 points.
The week will continue with downhill events, curling, Nordic events, broomball, skating, and end with the closing ceremonies on Monday, March 2nd. 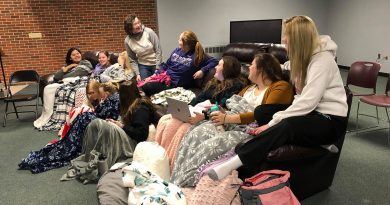 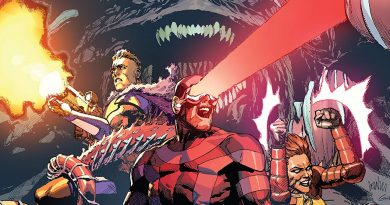