It’s hard to believe, but violent crime, particularly those involving the use of firearms, is at an all-time high in South Dakota these days.

Whether it has been armed robberies, gang related activities or isolated homicides, the state, and Sioux Falls in particular, has been hit hard in recent months. Now, it’s starting to hit home in the lives of young people attending such local universities as the University of Sioux Falls.

Just last week, an early morning incident occurred on campus involving an unidentified individual with a handgun. It was officially labeled a “hit and run” as the suspect’s vehicle was rendered inoperable after hitting a snow bank, and he would flee the scene on foot.

In reality, the situation itself was innocent enough – it’s certainly not unusual for South Dakota residents to own a firearm. Still, a handgun in the hands of a shady individual so close to hundreds of sleeping college students is still cause for concern.

Campus Security assured USF Students and Staff that this is an isolated incident and, while vehicular accidents have occurred on campus before, this is the first time a firearm has ever been involved.

“I don’t think [the suspected firearm] has been confirmed by police,” said Officer Kevin Grebin, Director of Campus Security. “We are just very fortunate that this is a very, very rare [situation] that occurs on campus.” 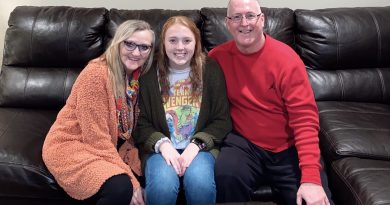 How Teachers are Adjusting to Distance Learning

October 20, 2020 Mercede Odegaard Comments Off on How Teachers are Adjusting to Distance Learning

April 8, 2015 Editor-In-Chief Comments Off on Ring by Spring